101
The Yeti (Japanese: イエティ Yeti) is a boss that is fought in the Powdered Peaks alongside a Cleric during their quest.

It's an ape-like creature covered in white fur with a blue face, hands and feet. It also appears to be wearing a blue bikini bottom. It has a Mii's eyes where its normal eyes would be.

Near the base of Tschilly Peak, while the party tries to pronounce "abominable", the monster will appear and reveal itself to be actually called a Yeti.

After its defeat, the Cleric will then reward the party with three servings of Golem Steak ★★.

A Yeti in the Journal.

The Yeti in battle. 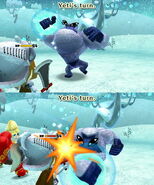