232
The Wild Running Nose (Japanese: ワイルドはなじん Wild Noseman) is a monster in Miitopia. It is the strongest among all Running Nose-based monsters. They can be very dangerous, especially when paired with other Wild Running Noses and/or more dangerous monsters, which they often are. 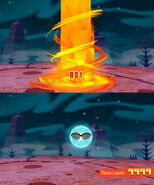 A Wild Running Nose getting defeated.

A Wild Running Nose that has been distracted.