Wields powerful swords, and is skilled at both attack and defense.

The Warrior (Japanese:せんし; Senshi) is a job in Miitopia that focuses on single-target damage and party defense.

Their weapon of choice is the Sword.

Their clothing is called Armor.

Boasting high HP, Attack, and Defense, the Warrior is the perfect physical party member, but lacks Speed and Magic.

The Warrior's default attack is single-target only.

A Warrior dressed as Mario

A Warrior with the best possible gear of the Legendary Sword and Legendary Armor.

A Warrior's sword is large due to the Mage's Enlarge Weapon.

A Warrior complimenting an Imp.

A warrior icon on the title page.
Add a photo to this gallery 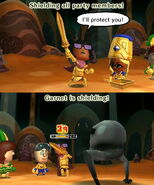 The Warrior's Proud Protector skill, which allows the user to automatically defend any ally (or him/herself) about to get attacked in the current round. 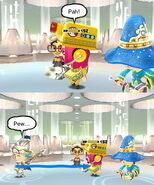 A guest Mii using Snap Out of It on a laughing ally. 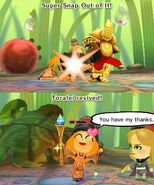 Super Snap Out of It failing

A Warrior protecting another Mii

A Warrior protecting themselves
Add a photo to this gallery

Retrieved from "https://miitopia.fandom.com/wiki/Warrior?oldid=37405"
Community content is available under CC-BY-SA unless otherwise noted.