"This beauteous immortal flourishes the forces of darkness with flair."

The Vampire (Japanese: ヴァンパイア; Vampire) is a secret job in Miitopia. They are a very powerful class that has different elemental attacks and can steal HP. It is unlocked by obtaining the Bat Charm, which can be found by helping a Vampire in the Travelers' Hub, specifically the quest where the boss is a Pop-Up Puppet.

Their weapons of choice are Bats.

Their clothing are called Suits.

When hit physically, if they have the Curse ability, they can cause half damage they took to the enemy who attacked them, as well as having a chance of reviving on their own after dying.

The Vampire's default attack hits all enemies, but the strength progressively weakens as it hits more enemies. Vampires also by far have the largest max HP and can deal both strong physical and magic attacks. Their main drawback though is that they are also one of the slowest jobs aside from the Tank job, typically moving after everyone else on the battlefield (including monsters) has had a turn. 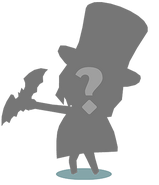 Silhouette of the Vampire class on the official website

A Vampire hovering instead of walking.

The Vampire Job icon.
Add a photo to this gallery

A Vampire "cursing" an attacking enemy

A Vampire reviving from the dead

A Vampire using Poison Mist, a skill that targets all enemies

The Vampire's Bite skill, which drains an enemy's HP 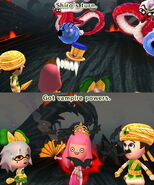 A guest Mii using Enthrall on an ally Mii

An Enthralled Mii reviving from the dead 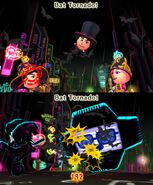 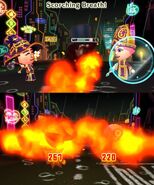 A Vampire using Scorching Breath.
Add a photo to this gallery

Retrieved from "https://miitopia.fandom.com/wiki/Vampire?oldid=36630"
Community content is available under CC-BY-SA unless otherwise noted.