I'm Eira! Yes, that's my real name. Thanks for stopping by my profile page!

I'm just another player who loves all kind of video games, but unfortunately, I don't usually play multiplayer games. I'm a shy Single-player, so I prefer to enjoy the story, world and characters of a game by myself.

If you want to know my personality trait, I can tell you that I am an INFJ-T (Advocate), Enneagram type 9w1 (The Negotiator) and I'm also positioned in the Neutral Good section in The Alignment System.

You can find me more active on the Luigi's Mansion Wiki, another Nintendo franchise like Miitopia, where I work as the bureaucrat. Maybe that's why I love the Manor Macabre so much.

I would qualify myself as an ♠ Explorer ♠ gamer and kind of an ♦ Achiever ♦ inside the four gamer types of Bartle taxonomy of player types. This means that I love to see every little detail inside and out a game, I take my time to explore every corner in a room, talk to each character, seeing all dialogue and endings possibles. I would be the strange person who would never skip a tutorial or explanation just because it's a part of the game, in fact, I would even seek them just to read it. Even easter eggs, references, theories and glitches are interesting to me. I also try to obtain every collectable in a game, if it's possible.

Sometimes I can tend to lean more to the ♥ Socializer ♥ gamer personality, those who enjoy talking and being kind to other players and even fictional characters in the game. Sometimes I like to replay games to learn more about the characters or to try to imagine myself in the protagonist's place and think of how I would react in different scenarios. If I play online, something that I don't usually do, I most likely would try to help other players as much as possible instead of rival them. As you can see, I don't like playing competitive games at all, but that doesn't mean that I can't appreciate other things about them or see others playing them.

I love games so much that I have even decided that this is the professional career I want to achieve, or at least, my dream is to make or participate in the creation of a video game someday. That's why I'm studying video games and animation in the present. I am very bad at programming though, and I prefer to focus on the artistic part in projects like this.

I have Miitopia for the Nintendo Switch, but I started playing Tomodachi Life years ago, where what I liked to do the most was create different characters, especially based on one of the costumes from the game. Instead of giving a Mii the perfect outfit, I would create a perfect Mii for a costume that I liked, and it's something I also do in Miitopia sometimes once I finished the game's story mode.

I was losing interest in Tomodachi Life, but when I saw the Switch version of Miitopia announced, where instead of being an ordinary life your characters lived an adventure, had "jobs" and there were also so many makeup and wig options, I decided to give it a try.

Apart from my Hero , who is a perfect version of myself, all the characters that I have created in Miitopia are original and new, created specifically for the game. I have not added any acquaintances of mine, famous person or existing characters, although now that I have unlocked the Villa, I plan to create some existing characters from other sources, but I've finished the game with a Team full of original characters and a self insert.

To create the characters in the story mode, I had in mind all the jobs and Personalities that are disponible, this wiki helped me a lot to take track of everything for this. I put together in my head the combination of job and personality that I saw most interesting, trying not to repeat any of them for other characters, and I created Miis based on this idea. Although as the story progressed and having so few personalities compared to jobs, some personalities were repeated, but I tried to at least not repeat any job until the main story was over.

For my hero I have chosen first the job of Mage, then Imp (although I use it more as a fairy or an angel) and finally a Princess. The mage is the one that I use the most because I have it at a higher level, but I'm trying to make imp be her main one, as I like it better.

Despite this, I have decided to leave the Mii Cast as it is, so all other NPCs are the Miis preset in the Switch version. Although I was more than once tempted to create a Mii for a NPC based on some existing character due to the similarity of roles with a character that exists in another source. I didn't do this, however, but I'm sure people has done it already in their game. Really glad to see the creativity of some people and amazing creations with this game.

I have also chosen to save The Dark Curse, so I have also made a creation of him based on both the description of what happened to his former self and the curse's appearance, which was somewhat tricky, as his former self was ordinary but The blue curse has quite a characteristic eye, but I think I managed to do it correctly having both in mind.

The hero of the story and my self insert. This character is a must in the team unless when feeling sick.

The Mii used is the one that I have used all my life on other consoles but improved with the new Switch options. The only problem is that when passing it to this game where the makeup options are more advanced, it collides with some tricks that I used in the normal editor of the console to make some effects, but I have been able to modify part of them to use those of Miitopia in its place.

Boy Horse
The horse of the team.

In all games I use the name "Atawi" for horses, which is "Iwata" backwards, as a reference and tribute to Satoru Iwata.

This character wears red sunglasses for a "cool" effect, but below them, he hides a blind eye caused by a wound.

I was trying the new features and possibilities with the makeup, so I also added a red gem in his forehead. 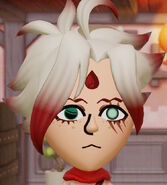 His eyes behind his sunglasses.

The second party member recruited. One of the current characters more used for my team. 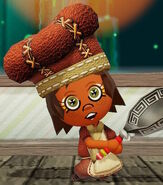 The third party member recruited. One of the current characters more used for my team.

The fifth party member recruited. One of the current characters more used for my team.

The sixth party member recruited. One of the current characters more used for my team. 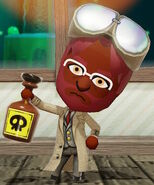 "Now we are talking!"

Mii
Cerberus
"Cat got your tongue?" 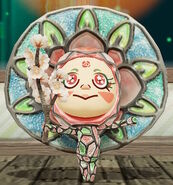 Created after the main story.

She has heterochromia, one of her eyes representing her power, which she hides behind her fringe and only discovers when using a lot of power.

Her eye behind the fringe.

Created after the main story.

She has vitiligo, and this forms clover-like spots on her face.