They appear with their boss in the Tower of Dread and daily re-fights.

They have the boss status (as seen by their health bar) and are immune to 1-hit KO moves and the "dancing" status.

They are robots made of black metal, with a light disc with one Mii eye on it.

It is not very strong, except for its laser attack.

Tip: If the Calc King summons two Ultimate Robot Warriors, then the other can use its partner's cross-hairs to immediately fire its laser. To prevent being caught off-guard, dismantle the robot before the boss can summon more. Multi-hit skills like Hail of Arrows works really well for this.

The Ultimate Robot Warrior being summoned by the Calc King. 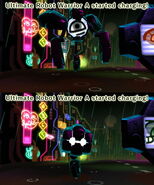