Miitopia Wiki
Register
Don't have an account?
Sign In
Advertisement
in: Monsters, Turkeys, Realm of the Fey

052
The Twerkey (Japanese: シリトリ Shiritori; Butt Bird) is an enemy found in the Realm of the Fey. It has a chance of dropping Turkey Curry when defeated. Its variants are the Twergull and the Twerpea.

Twerkeys are based off turkeys. They have two antennae-shaped feathers on top of their head, large round eyes with pink eyelids and black pupils, an orange hooked beak, short wings, fanned tail, short orange legs and a big fat butt as their most prominent part, which they are always shown shaking in front of their enemies.

Twerkeys have a mostly red plumage with some darker red on their wings, surrounding their neck and the base of their tail feathers, gray on the tip of the tail feathers, and peach on their undersides.

Its Mii part is a mouth placed in the middle of their rear.

Its name comes from turkey, the bird it is based off and twerk, a provocative dance characterized by shaking or thrusting the buttocks.

A Twerkey in the Journal.

A Twerkey attacking a Mii. 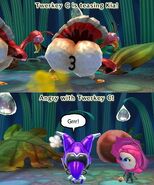