183
The Troll (Japanese: トロル Troll) is an enemy found in the 1st District in New Lumos and in various low-level temporary dungeons. It is a palette swap of the Yeti.

It's an ape-like creature covered in green fur with a black face, hands and feet. It also appears to be wearing a black bikini bottom. It has a Mii's eyebrows and eyes where its normal eyes and eyebrows would be.

Encountering the Troll along with an Brand-New Robot. 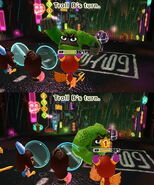 A Troll attacking a Mii.

A Troll that has been defeated.

A Troll that is distracted.

A Troll defeated by Monster Dinner.