Town Guide
Travelers
The Travelers' Hub (known as Traveler's Hub in the Nintendo 3DS version of the European English version; Traveller's Hub in the Nintendo Switch version of the European English version) is a region in Miitopia, located at the very center of the world. It is first accessible after defeating the Dark Lord in Karkaton. This serves as the main location for finding new quests. The player can also check the percentage of their collected medals by talking to the Town Guide at the entrance. 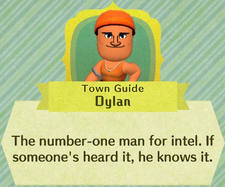 The first Mii to greet the player when they first arrive at Travelers' Hub. After the player beats the game, he will tell them the percentage of the medals they have collected so far if they agree to show him their medal collection. 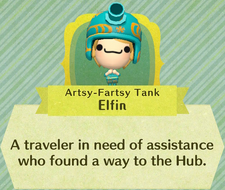 The main source of new quests (and thus, more items and gold). Travelers come in various appearances, jobs and even levels. Three quest-giving travelers are randomly-generated each real-time day, though this can be regenerated again with different characters on the same day by resetting the game before going past the visitor announcement screen. Some ask the player to do simple errands like delivering a present to an NPC Mii, some ask the player to travel through a specific dungeon, and some ask the player to escort the Traveler while traveling through a specific dungeon. These Travelers are more likely to be recruitable when the player talks to them again after completing their favors (if the player chooses to recruit them when the prompt shows up), with the only confirmed exceptions from this category being the delivery Travelers and the default "world Mii" characters that are based on CPU characters from Wii Sports Club or Wii Party U regardless of whether they gave Errand quests or not. Travelers based on unique NPCs (the Youngest Fab Fairy, the Worried Explorer, and the Quizmaster) always have their own type of quest based on the character instead of being decided randomly, though the quest locations tend to be still random. Unlike the randomly-generated Travelers, these NPCs remain unrecruitable.

Prior to the post-game, the player has to collect Sky Scraper Jewels from completing preset quests from this region, presumably as a way to introduce the Hub's "quest" mechanic to players.

The Mii for this role is decided randomly by the game only after the player takes the Mage's quest, so it is not possible to preemptively recast this character in the Mii Cast menu until said condition is fulfilled.

The kidnapped friend is a main story NPC that only appears in one of the Travelers' Hub's main story quests. As the role name suggests, this Mii is a friend of a traveler, specifically that of a Thief, that ended up kidnapped by a monster. Said kidnapped friend is said to have found one of The Sky Scraper jewels only to be whisked away to the Powdered Peaks, specifically at Ghontu Cave, where the face ends up attached to the Ice Queen. Rescuing this Mii rewards the player with the left eye jewel.

The Mii for this role is decided randomly by the game only after the player takes the Thief's quest, so it is not possible to preemptively recast this character in the Mii Cast menu until said condition is fulfilled.

"Loves going sightseeing, but somehow always winds up in the wrong place."

A character that only appears when the player decides to take a quest with the objective of rescuing a Traveler's missing friend. As its role name suggests, this Mii ends up getting separated from their friend (the quest giver) and thus getting lost in a random dungeon, where their face ends up attached to a boss monster. So, boss battles involving the Lost Friend allow the guest Mii that temporarily accompany the party to participate.

As mentioned before, the Lost Friend won't appear in the game until the player takes a quest involving said Mii, so it is not possible to preemptively recast this character in the Mii Cast menu until said condition is fulfilled.

"Whisked away by a monster, leaving a worried friend behind."

A variant of a Traveler's friend who, as its role name suggests, is captured by a monster. Despite the different wording, quests involving this Mii and the Lost Friend share the same objective: Find a Traveler's friend inside a random dungeon, where said friend's face ends up on a boss monster. If the quest giver joins the party for that quest, he/she will get to fight alongside the player's party.

Because their appearance is triggered by taking a quest involving this type of NPC, it's not possible to preemptively recast them in the Mii Cast menu until said condition is fulfilled.

There are a few quest types given by Travelers.

The most common quest type, denoted with a paper icon and a difficulty name when the player walks close to a Traveler with this request. Despite the different wording of the request (dependent on the Traveler's personality trait), all quests belonging to this type involve the party traveling into a random dungeon to defeat a boss monster hiding there. The boss monster can either be a rare, powerful variant of a certain species, possess the client's face, or possess the client's friend's face.

Depending on their request, the client may join the party temporarily. However, if the client's face is attached to the boss monster, the player will be left fighting with their usual party.

After clearing a quest of this type, it is possible to recruit the client that requested it. The client will have preset weapon and clothing (the former can only be seen earlier if they became a random party member) and level (based on the quest level) as well as preset personality not previously seen until the player recruits them.

The Rank of the quest will determine the amount of gold rewarded, with each rank having a different range of gold reward, though if possible the reward will often be a weapon or clothing that is an upgrade to any party member at the Inn.

Denoted with a gift box icon. Usually pops up one at a time whenever the Travelers' Hub updates the quest list (though sometimes this quest type does not pop up at all for the day), this quest type involves the player delivering a package or gift to a random NPC found throughout Miitopia. Similarly to the "present" event in the Inn, the receiver's reaction varies depending on the package/gift given, however it does not influence the quest success or reward.

Travelers associated with this favor are either Mii characters with equipment under level 20 (the minimum level for post-game quests) or Stationmaster Cats who introduce themselves as deliverymen/women.

Rewards from this quest can be either Game Tickets, Outing Tickets (Nintendo Switch version only), or a set of three grub belonging to a specified selection. There are various grub selections which influence the type of grub that will appear in the rewards screen.

Exclusive to Youngest Fab Fairy. Like the common "adventure" quest type, it involves the party going into a random dungeon to fight a boss monster. The Youngest Fab Fairy will always accompany the party when this quest is taken, and her reward is always in the form of some grub.

Exclusive to the Worried Explorer. It is much like an "adventure" quest type, and is denoted by the same icon, but all monsters encountered belong to the Snurp species (except for encounters triggered via certain events).

The boss battle consists of two common Snurps plus either a Rich Snurp, a Delicious Snurp, a Very Rare Snurp, two Gold Snurps alongside a Rich Snurp, two Tasty Snurps alongside a Delicious Snurp, or two Rare Snurps alongside a Very Rare Snurp. At higher difficulties, the two Gold, Tasty, and Rare variants are replaced with the stronger ones (which makes two common Snurps plus three giant Snurps), though it is also possible for the boss battle to involve all three "giant Snurp" variants. No quest rewards are gained from this type of quest, as the reward is part of the quest itself.

The following table lists all the possible levels for this quest type. Bosses that become the focus of a given quest level depend on the Worried Explorer's quest wording. However, his very first favor, a level 12 quest (Very Rare Snurp boss), is part of the main story as one of the introductory quests and thus can only be played once.

Exclusive to Quizmaster, denoted with the Quizmaster's hat as the quest icon. Like "errand"-type quests, this quest does not involve battling monsters. Instead, the Quizmaster requests the player to visit him in a random dungeon where the player has to take on three quiz challenges.

The quizzes are randomized per challenge (even if the player fails and retries), so the player has to be ready for all quiz types from various difficulties, especially the final challenge, where the quiz type is always "Quiz Remix", meaning the player has to face against three consecutive questions each with a random quiz type and difficulty.

Clearing this quest will reward the player with Game Tickets.

Below is a list of all adventure quests that randomly generated travelers can provide, not counting the "rescue a friend" quests and the unique NPC quests. All wordings are associated with a certain personality, with a few exceptions which can be given by travelers of any personality.

After viewing the credits the first time, the Travelers' Hub will provide six preset quests (only differentiated by quest level (though still have preset level range each) and quest giver) that will not go away even if the player does not take them for the day. Half of them, especially the first of such quest, focus on the post-game region Galados Isle as a way to introduce it to the player.

Due to the fact that the player will receive new quests every 24 hours, some players have attempted to adjust their Nintendo 3DS or Nintendo Switch clocks to refresh the Travelers' Hub quests faster. However, adjusting the 3DS/Switch clock in any way will reset the 24-hour timer. It will not resume until the next day, thus halting the player's progress in the post-game.

The Town Guide standing by the entrance to Travelers' Hub.

Two NPC-based Travelers with their own quest bubble.

An example of a Traveler that can be found in this region.

An example of a Lost Friend.

Example of an Abducted Friend.

An example of a traveler encountered in the Traveler’s Hub.

Notification about new Travelers (and thus new quests) that pop up each day.

An example of a quest the player can accept.

An example of a completed quest: The Lost/Abducted Friend reunited with their friend.

Example of the errand, unfortunately the Mii receiving the gift does not like it at all.

An example of an errand, where a gift being sent where the recipient was not too pleased.

The Town Guide in the European English version, known as the Well-Informed Bod.

A Traveler's profile in the European English version.

The notification for enabling popular Mii characters to visit the Travelers' Hub (spelled "Traveler's Hub" here) upon unlocking the region.

Accepting the quest in the Nintendo Switch version. Note the quest giver's proper look with makeup.

Talking to the Town Guide.

An example of an Errand quest.

A group of daily visitors consisting of a Popular Mii (left), a Mii taken from the player's list (middle), and a recurring NPC (right).
Community content is available under CC-BY-SA unless otherwise noted.
Advertisement