This term refers to the starting "job" the player has when a new game is started. If you are looking for quest givers (also referred to as Travelers), see Travelers' Hub.

In Miitopia, the Traveler serves as a template for a basic Mii's appearance, as in Mii characters that have no combat jobs or NPC roles assigned to them yet. Travelers have no weapon and wear a robe (its color is based on the Mii's favorite color) with a thick collar, a small brown bag, a pair of shorts, and brown sandals. In case of the latter, the whole clothing does not count as armor, thus providing no boost to stats.

Traveler is the hero's default job since the start of the game. He/She ends up being reverted to this job twice by the Dark Lord in the main story. Despite this, the Guardian Spirit will always suggest a new combat job for him/her in both cases, thus all battles in the entire game never involve the Traveler job.

Despite the fact that it is never used in battles, the Traveler has its own stats. However, it has no combat skills. 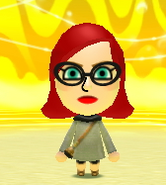 Female Traveler Mii. Note the lack of belt on the waist. 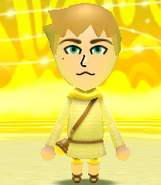 The Protagonist reverted back to the traveler job.

The Traveler's profile in the 3DS version.

The guest Mii for a Travelers' Hub quest appearing as a Traveler inside the Inn.
Community content is available under CC-BY-SA unless otherwise noted.
Advertisement