The Darker Lord (Japanese: 超魔王 Chou-maou; Super Demon Lord) is the form the Great Sage is forced to take after being possessed by the Dark Curse and becomes the main antagonist of the second half of the game after the Dark Lord is defeated, and serves as the final boss for the main story mode of Miitopia (Game).

Birth of the Darker Lord

After a long, tough battle against the Dark Lord, the Dark Curse escapes the now-broken medallion. In a rage, the Dark Curse attempts to possess the hero, only to be blocked out by the Great Sage, unintentionally possessing them instead. This, however, only makes the Dark Lord even more powerful, as his original powers are now combined with the Great Sage's powers. Dubbing himself the Darker Lord, he leaves the castle, and creates a new castle with his new powers.

Now even more powerful, The Darker Lord resides in his Sky Scraper, awaiting the protagonist to face them again. Eventually, the Hero does make it to the Sky Scraper, and the Darker Lord steals the faces of the Princess, the King, the Genie, the Fab Fairies, and the Factory Worker once again, attaching them to a Gold General "Princess", a Strong "King" Golem, a Red "Youngest Fab Fairy" Frog with "Fab Fairy"Poles, and a "Ex-Dark Lord", Phantom of Evil, respectively. All of these monsters are simply harder versions of end-bosses faced at the end of each world, with the exception of the Cerberus. After yet another defeat to these monsters, the Darker Lord retreats to his pocket dimension of Otherworld, made up of all the faces he had stolen before.

Otherworld and the Final Battle

With nowhere left to run, the Darker Lord confronts the protagonist for the last time, saying he was going to die of boredom if they never showed up. The hero demands that the great sage be released from his possession. The Darker Lord, seeing this as one final challenge, absorbs a large amount of faces. This overwhelming amount of faces makes the Darker Lord even more powerful, and he reaches his second form. Due to the extent of the Darker Lord's power, the hero cannot face him alone, and must choose members of their party to face the Darker Lord's hands, before facing the Darker Lord himself. After choosing who fights each hand, the battle begins.

However, the party has not finished the battle yet, and the Darker Lord appears before them, stealing and absorbing the faces of the party members that faced both of their hands. These six new faces further extend the Darker Lord's power, resulting in the birth of the Darkest Lord, and it falls to the four remaining Miis to finish him off.

In battle, the Darkest Lord is by far the hardest boss in the main game, having huge amounts of attack power and defense, and attacks by throwing coins with faces on them. He can also summon "Teammate" Coins to assist him in battle, using the faces of the other six party members each time, similar to the battle against the Dark Lord. Additionally, like the Dark Lord battle, his pattern will change after half of his HP is depleted, such as a move that reduces the HP of every party member to 1, or summoning a wave of meteorites to damage all of the party. After a long battle, the Darkest Lord is defeated, and explodes in a wild fury, releasing the Great Sage.

153
"Great Sage"'s Left Hand (Japanese: "Mii's name"の左手 "Mii's name"'s Left Hand) is the first boss encountered in the Darker Lord's Domain. Its appearance is of a large blue hand with long fingernails, and a wrist made out of three gold coins, each possessing a face part. Its defeat unlocks the "Great Sage"'s Right Hand battle.

When facing the Darker Lord, the player will be prompted to split the team into three groups, three for the Left Hand, three for the Right and the last four for the face.

154
The "Great Sage"'s Right Hand's (Japanese: "Mii's name"の右手 "Mii's name"'s Right Hand) targeting can be hard to shield as nothing stops the hand from either using Towers of Flame right after or breaking shields with Lightning then using it. Luckily, it is easily survivable.

156
After defeating the hands, the Darker Lord will steal the faces of the hand fighters, becoming "Great Sage", The Darkest Lord (Japanese: 真超魔王"Mii's name" True Super Demon "Mii's name") and facing the last team for the finale.

The Darker Lord takes on the appearance of a demonic version of the Great Sage, wearing white, flowing robes that fade into turquoise, while having various features present on the original Dark Lord, such as demonic hands and an open eye medallion. The hood is replaced with a large collar, however, and the head features a more bony appearance, as the cheeks pinch in and the chin is more defined. The hairstyle is also different. While the Dark Lord had a parted, Victorian-esque hairstyle, the Darker Lord has a blue, twisted hairstyle that is mostly shaved off, appearing very similar to the Dark Curse.

“Are you joking? I get Great Sage powers too?! This is even better than being a Dark Lord! I’m now...an even Darker Lord! Waaa ha ha haaaa!”

- The Darker Lord, moments after possessing the Great Sage

“So you finally made it up here. I thought I was going to die of boredom.”

- The Darker Lord, right before the final fight

”And now, the moment you’ve all been waiting for!” 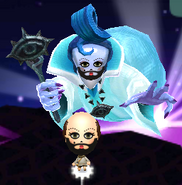 The Darker Lord on the world map

The Darker Lord encountered in the Otherworld

The pop-up message displayed when attempting the Darker Lord fight with less than ten Miis.

The Left Hand in the Journal. 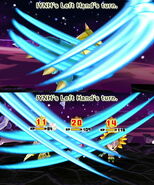 The Right Hand in the Journal. 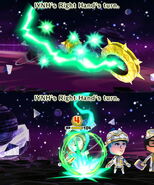 The "Great Sage"'s Right Hand locking on to party members.

The "Great Sage"'s Right Hand's magic attack after the lock-on.

The Darkest Lord in the Journal.

The Darker Lord showing up and stealing the other Teammates' faces, becoming the Darkest Lord.

The Darkest Lord along with two "Teammate" Coins

The Darkest Lord with his guard lowered 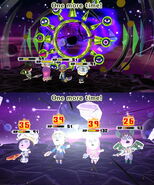 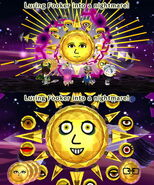 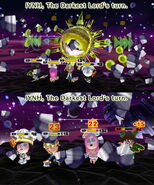 The Darkest Lord transitioning to his final form

The Darkest Lord transforming into his final form, then using Big Bang

The Darkest Lord glowing red after he transforms.

The Darkest Lord before exploding after defeating him

The sequence of The Darkest Lord's explosion

An unused animation for the Darker Lord. Image from The Cutting Room Floor.

Another unused animation for the Darker Lord. Image from The Cutting Room Floor. (However, This animation is used by the Evil Sage and Light Sage when using Tower of Flame.)