112
Tarantulas (Japanese: タランチュラ Tarantula) are monsters found towards the end of the Sky Scraper. They tend to appear with their own kind, or with other monsters, such as I, Medusas.

Despite the fact it has multiple Mii eyes, defeating it only relinquishes two of them.

This monster is a large, brown, striped spider hanging from a spider web. It has three red eyes and a swollen, twitching abdomen that's twice as big as the rest of it. On the abdomen are multiple Mii eyes. Strangely, like its cousin, the Demon Spider, it only has six legs instead of eight.

A Tarantula in the Journal.

A Tarantula attacking a Mii. 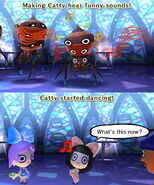 A Tarantula causing a Mii to dance uncontrollably.

A Tarantula defeated by Monster Dinner.

A Tarantula defeated by Righteous Anger.

A Tarantula causing a Mii to dance in the Switch version