Miitopia Wiki
Register
Don't have an account?
Sign In
Advertisement
in: Tadpoles, Monsters, Realm of the Fey

066
A Tadman (Japanese: オタマン Otaman) is a monster found in Lotus Lake in the Realm of the Fey. They tend to appear with their own kind, or alongside stronger enemies such as Kind Golems, Spring Breezes and Twerkeys.

Defeating it relinquishes a Mii mouth.

This monster is a tiny blue tadpole with a yellow tail and white, round belly. It interestingly has its own eyes instead of a Mii's. It does have a Mii's mouth in the middle of its belly, though.

A Tadman in the Journal.

Encountering a Tadman along with a Spring Breeze and a Kind Golem. 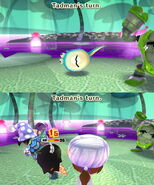 A Tadman attacking a Mii.

A Tadman defeated by Monster Dinner.

A Tadman defeated by Righteous Anger.