187
The Super Alien (Japanese: スーパー宇宙人 Super Alien) is an enemy which shows up in postgame dungeons and New Lumos' 2nd District.

It wields a ray gun which it fires in combat and is much larger and tougher than it's brethren.

It is a larger form of the Alien, this time colored green with three Mii eyes in a triangle shape. Its ray gun is pale pink with a bright pink tip and handle.

Tip: If a Mii has been made "old", put them in the Safe Spot. They'll be useless until the effect wears off.

Encountering two Super Aliens along with a Water Snurp. 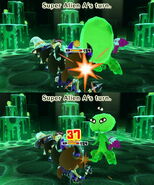 A Super Alien attacking a Mii.

A Super Alien aging up a Mii.