149
Space Goblin (Japanese: スペースゴブリン Space Goblin) is a monster found late-game in the Otherworld. It seems to be a purple Goblin wearing a spacesuit and space helmet. They tend to appear with their own kind and sometimes with other monsters, such as Aliens. They can also rarely appear in other worlds during quests.

Defeating it will rescue a pair of Mii eyes, eyebrows, and glasses.

It is a Goblin with blueish-purple skin. It wears a space helmet and its body resembles a white astronaut's suit.

A Space Goblin in the Journal. 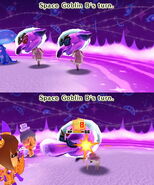 The Space Goblin attacking a Mii.