099
The Snow Griffin (Japanese: スノーグリフォン Snow Gryphon) is a Griffin-type monster that appears post-game in Tschilly Peak of Powdered Peaks. They tend to be fought alone, or rarely in pairs. Occasionally, they'll team up with other monsters such as Brave Moles and Crystals.

Despite the fact a Snow Griffin has six Mii mouths, defeating one will only relinquish one of them.

The Snow Griffin is a snowy-white Griffin with grey wing-tips and a pale yellow beak.

It holds six of the same Mii mouth on its wings.

Encountering the Snow Griffin along with a Facerberus.

The Snow Griffin attacking a Mii. 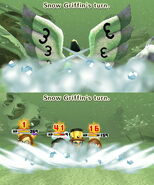 A Snow Griffin with its guard down.

A Snow Griffin being distracted.