Miitopia Wiki
Register
Don't have an account?
Sign In
Advertisement
in: Monsters, Snails, Realm of the Fey

Snails (Japanese: デンデン Denden; Snail) are monsters found in Citrus Cave and Lotus Lake in the Realm of the Fey. They tend to appear alongside Pom Poms, Demon Spiders and other stronger enemies. It will never battle alone.

This monster is a medium-sized yellow snail with goofy-looking googly eyes, a tentacled mouth and strangely, two tiny arms. Its body is housed inside of a red, swirled shell with darker red stripes. Two Mii eyes are set where the snail's pupils would be.

Encountering a Snail along with a Lureshroom and two Demon Spiders. 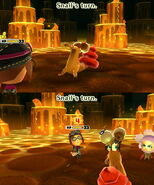 A Snail attacking a Mii.

A Snail defeated by Monster Dinner.

A Snail defeated by Righteous Anger.