008
The Smileshroom (Japanese: ワライタケ Waraitake; Laughing Mushroom) is an enemy found within the Strange Grove. It is one of the first enemies the player will encounter that can cause status effects. It is a Shroom-based enemy. And as a support enemy, Smileshrooms primarily focus on giving the party debuffs.

Sometimes accompanied by Rock Moths, Moles or Goblins when being encountered.

Smileshrooms are huge sentient mushrooms. A Smileshroom has a green cap with reddish brown spots on top of it and a dark tan stalk. Under Dark Lord's control, Mii eyes are attached to its cap and a Mii mouth is attached on the cap's underside. 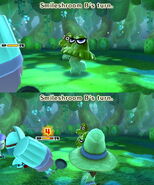 A Smileshroom attacking a Mii. 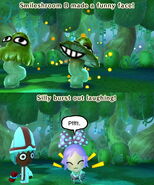 A Smileshroom making a Mii laugh.

A Smileshroom defeated by Monster Dinner.

A Smileshroom defeated by Righteous Anger.