086
Silver Cobras (Japanese: シルバーコブラ Silver Cobra) are monsters that appear in the The Dark Lord's Castle of Karkaton, typically within the Armory and Inner Passage. They tend to appear with other Silver Cobras, but occasionally appears with other monsters, such as Spike Towers.

Defeating this monster rescues a Mii's pair of eyebrows, a nose, a mouth and sunglasses.

It's a very large, silver snake with a dark pink underbelly that looks unmistakably like a cobra. It has Mii eyebrows, a nose, mouth and a pair of sunglasses located on the front of its hood. 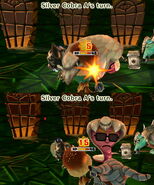 The Silver Cobra attacking a Mii. 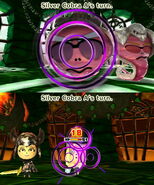