"Applies the power of science and technology to aid you in battle."

The Scientist (Japanese: かがくしゃ kagakusha; Scientist) is a Job in Miitopia that focuses on area-of-effect attacks and supporting allies.

Their weapon of choice is the Flask.

Their clothing is called Lab Gear.

The Scientist is able to use skills to hit multiple enemies, while helping allies by giving them attack buffs, HP drain attacks, and even status effect immunity.

The Scientist's default attack is single target only.

The Scientist's name in one of the trailers is "Adam".

A Scientist, ready to eat food from off the floor and then the grill.

A Scientist outright berating a Cat.

A Scientist's weapon is large, due to the Mage's Enlarge Weapon. 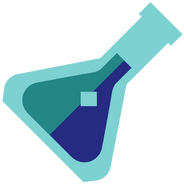 The Scientist Job icon.
Add a photo to this gallery 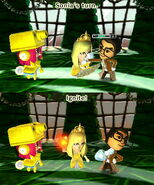 A Scientist using Cure.exe (after an ally uses Lend a Hand) and it will boost Friendship if used on a Teammate.

Retrieved from "https://miitopia.fandom.com/wiki/Scientist?oldid=36637"
Community content is available under CC-BY-SA unless otherwise noted.