Miitopia Wiki
Register
Don't have an account?
Sign In
Advertisement
in: Monsters, Scorpions, Neksdor, Monsters that can instantly knock-out Miis

037
Scary Scorpions (Japanese: つよきなサソリ Tsuyoki na Sasori; Awesome Scorpion) are a variant of the Scaredy-Scorpion. They tend to appear with other Scary Scorpions, or alone.

When defeated, they relinquish a pair of Mii eyes and eyebrows.

Scary Scorpions have the same physical appearance as a Scaredy-Scorpion, but they have different eyes and a purple hue instead of a blue one. 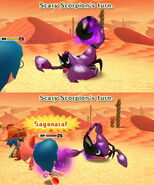