103
The Running Nose (Japanese: はなじん Hanajin; Noseman) is a monster in Miitopia. It is one of the Nose-based monsters. They tend to appear with their fellow Running Noses and other types of monsters. Occasionally, they can appear alone. Its English name is a pun of "runny nose," and is likely also based on the old "Is your nose running?" joke.

It is a tan nose-shaped monster with legs growing out of its nostrils. A pair of Mii eyes are attached on top of this monster.

Encountering a Running Nose along with Bread.

A Running Nose running into a Mii. 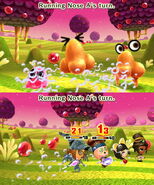 A Running Nose that has been distracted.