The Hero and his/her party members

"Takes pictures of travelers in the hope that he can sell them off."

The Roving Photographer wears an all-black body suit with a huge camera as its hood. 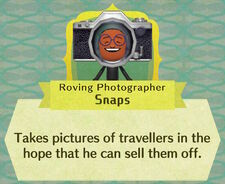 The Roving Photographer makes multiple appearances during the main story starting from the battle against Pharaoh "Genie" in the Great Pyramid. After a major boss battle, the player can encounter the Roving Photographer before finishing the stage the major boss is in. He will then offer the player a photo of a random moment in that battle (often embarassing/hilarious moments like getting certain status ailments or being damaged by certain attacks) for the low price of 20 G. Buying it will add the photo to the player's Album, while ignoring the photographer will make him sad.

After beating the story, he reappears one last time after the final boss in the ending, where he takes the picture of the entire party.

The Roving Photographer does not appear in the post-game, though he can be one of the daily letter senders in the Nintendo Switch version.

The Roving Photographer at the end of the credits.