129
The Robo-"Traveler" (Japanese: ロボ"Mii's name" Robo-"Mii's name") is a boss first fought in the Sterile Plant of Nimbus when the party are searching for the Jewels for The Sky Scraper.

A Scientist found one Jewel, but left it in the Plant, where a robot steals their face. Battling this boss for the first time will unlock the Shield Sprinkles.

This type of monster also makes an appearance as a post-game quest monster, as it looks the same and doesn't have an individual entry in the Monsters section of the Journal. Its moveset is even the same, though it's significantly stronger, being a post-game encounter.

They are physically identical to Aging Robots in their shell form.

However, when open, they possess two long arm guns with plating on them, two pauldrons and a curved head with two bolts resembling eyes. Its captive face is on its light-disc and the robot's motor is behind the disc.

When the protagonist first gained access to The Sky Scraper, its door is locked and requires unique Jewels to open it. One of the Jewels was found by a Scientist who is one of the Travelers' Hub visitors, but they accidentally left it in the Sterile Plant. The protagonist has to go to the deepest part of the plant to find it.

The post-game quest variant can randomly show up in the end of a temporary dungeon. Defeating it will clear the quest. It is fought alongside 2 Retroputer IIs. 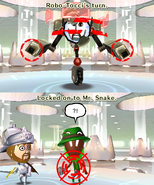 The Robo-"Traveler" targeting a Mii.

Robo-"Traveler" using its basic attack on one Mii. 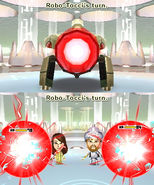 The Robo-"Traveler" using its laser attack.

An encounter with the Robo-"Traveler" in a post-game quest.

The Robo-"Traveler" in a high-level quest battle, alongside two Retroputer IIs.