160
Rich Snurps (Japanese: 超カネピョン Chou Kane Pyon; Super Money (Gold) Pyon) are a rarer variant of Gold Snurps. Rich Snurps-like Gold Snurps-are golden with black snouts, but unlike Gold Snurps, Rich Snurps wear crowns on their heads. The crowns are a rusty gold color, and in the center is a red and orange striped cushion.

One Rich Snurp can be found first on the Sky Scraper's map. Rich Snurps only use basic attacks, but have very high Attack, so quickly killing it or using shields can help best this rich foe.

Sometimes, the Worried Explorer will offer a quest where the boss is a Rich Snurp.

Rich Snurps give 20,000 G when defeated, making them the best source of money in the game.

Rich Snurps are like Gold Snurps, but bigger and wear a crown. Under Dark Lord's control, not only they possess Mii eyes like other Snurps, but also Mii eyebrows.

The party can also find them on the Galados Isle, on the tile before the Roaming Gourmet in Midland Marsh. There are two paths to be chosen in that area, in which the one to fight the Rich Snurp is the one that says "Gold".

They will appear there until a certain point where it is replaced with a Lion Snail and they must wait a bit before you can fight it again or retry the level until it does. This can take a long time, though. The only other sources are quest bosses.

The player encountering a Rich Snurp. 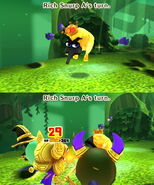 The Rich Snurp attacks a Mii. 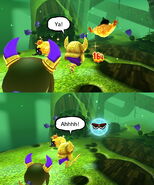 A Rich Snurp on the Sky Scraper map.