182
The Retroputer (Japanese: レトロピューター Retroputer) is a postgame monster which turns up in the Sinister Plant and New Lumos. Strangely, it's also found in cavern areas of Galados Isle on certain quests.

Defeating it relinquishes a pair of Mii eyes and a nose.

The enemy resembles a Famicom controller shaped like a plus with a screen in its center, bearing Mii eyes and a nose.

Buttons adorn the foe and its "control pad" is gold-and-black on its lower end.

Encountering the Retroputer along with two Trolls. 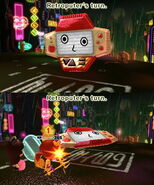 The Retroputer attacks a Mii. 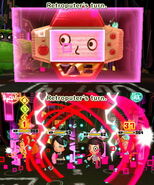 A Retroputer defeated by Monster Dinner.