Nightmare
Magic All
One More Time!

235
The Replica Dark Lord (Japanese: レプリカ大魔王 Replica Great Demon Lord) is a hidden boss which shows up when the party reaches the end of Uncharted Galados.

After its defeat, it never returns to that spot but leaves behind a chest containing the Elven Charm.

Multiple Replica Dark Lords also appear as regular enemies in post-game temporary dungeons, and on outings in New Lumos. Unlike the boss version, they're just as vulnerable to status ailments and one-hit kill skills as any other non-bosses.

It is physically identical to the Dark Lord without his eye necklace. It is smaller and tinted pink all over with rosy skin. Its cloak is red-tinted with violet mist. It has circles on its robe, unlike the other variants of the Dark Lord, who have diamonds on their robes.

Its Mii parts are a pair of eyebrows, eyes, and a mustache. Its mustache never changes and its facial hair is always brown in the Nintendo 3DS version, while the Nintendo Switch version can have more color variations.

Outside of its hidden boss status, Replica Dark Lord is also one of the possible bosses that show up in a quest dungeon. Defeating it will clear the quest, though it should be noted that this only applies to the boss version. If a Replica Dark Lord is defeated in a non-boss stage in the same area as the boss version, the battle doesn't count towards quest completion.

Tip: If encountered as a regular enemy, or in Uncharted Galados, apparently, it is susceptible to one-hit kill skills such as the Cleric's Righteous Anger and the Imp's Demonic Whispers as well as status ailment-inducing skills such as the Elf's Dancing Arrow and certain quirks like Kind Mii characters' Spare.

The boss version's magic attack is significantly more powerful due to its higher stats. 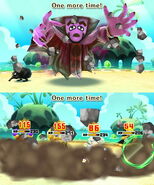 A Replica Dark Lord with it's guard down.