In Miitopia, having friends is truly a blessing.

Relationship improves when two Mii characters rest in the same room at an inn or through random actions during a battle such as the use of the assist skill "Concern", the Energetic quirk "Cheer" or healing a party member. The higher the friendship, the more assist skills are available. Assist skills activate randomly during combat and enable boosts for the attacking Mii, duo, trio or full team attacks, etc.

Although relationship is an advantage during battle, if two of the player's Mii characters fight or if a Mii gets jealous because his/her best friend is getting closer to another Mii, it will result in bickering and fights during battle.

The Relationship meter is symbolized by a pink heart.

In Miitopia for Nintendo Switch, the new horse ally can be bonded with a party member. Unlike between teammates, relationship level with the horse has higher boost per Inn stay. Refer to the Horse article for more details on its assist skills.

As mentioned above, relationship is improved by filling up a meter. Unlike party member levels, relationship levels have a constant number of required experience points (5) to reach the next level. However, how much earned varies by source. Relationship levels never decrease. Instead, a separate "hate EXP" is used to determine how close a Mii is to quarreling with another. The following table lists how much relationship EXP is earned from a given situation, not counting Outings.

For more specific ways, the following is some of the sources of relationship EXP:

Note: The above methods are not applied on guest party members as said guests cannot form a relationship of any kind with the player's Mii characters.

In the Chosen Ones trailer, the Cat is seen using Lend a Hand towards the Warrior, causing them to attack the Dark Lord at the same time. Afterwards, the Cat is shown giving Praise on the Warrior, with the latter being touched by it.

While the Mage is seen about to be attacked by a Kind Golem, the Cleric is seen activating the Sacrifice assist skill, and is subsequently defeated. The Mage is then seen using Avenge after the Cleric is defeated.

The Venture Forth trailer doesn't feature relationships specifically, but it shows the Mage gaining resentment towards the Cat, due to the latter gaining the "evil" status effect from an Imp.

Differences in the Camaraderie trailer

The way that relationships and quarrels are shown are slightly different in the Camaraderie trailer than they are in Miitopia. The following are the differences between the presented features in the trailer and actual gameplay. 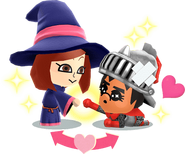 Official artwork of a Mage helping out a Warrior, showing their relationship. (3DS version)

Teammates bonding at the Inn.

Relationships of a team that set out

Resentment towards a teammate.

A quarrel between two teammates.

A party of Miis, all with max friendship status.

A successful attempt in apologizing to a Mii when placed in the same room.

The working out event between two Miis which boosts their relationship meter.

Two Miis with their backs turn at the Inn, apologizing event.

Doing an event that involves a possible friendship grow: A Mii with a onesided resentment against another, instead of dancing with them; they just look away. Resentment goes down a little.

A Cleric bonding with the horse in the Switch version.

The Resentment sign in the Switch version. Unlike the 3DS version, it uses the same one as the Japanese version.

Transition for levels 30 and above.

A Mii gains resentment status from another.

A Mii is forgiven.

A double resentment's one sided forgiveness.

A Mii being touched by her ally's praise

A Mii activating Get Well Soon

A triple Lend a Hand finishing off a boss.

The "Likes a lot" relationship level

The Cleric using Lend a Hand

The Mage becoming jealous towards the Warrior

The Mage reaching full resentment towards the Cleric

After being purposely tripped over by the Mage, the Cleric reaches full resentment towards the former 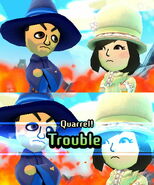 The Cleric and the Mage activating Trouble

The effects of Trouble

Lend a Hand, as portrayed by the Chosen Ones trailer 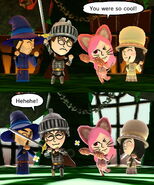 Praise, as portrayed by the Chosen Ones trailer

The Mage gaining resentment towards the Cat, shown in the Venture Forth trailer
Community content is available under CC-BY-SA unless otherwise noted.
Advertisement