213
The Red Orochi (Japanese: 紅色オロチ Beni-iro Orochi / Crimson Orochi) is a monster and a boss that can be found in one-time dungeons accessible only via quests.

As a quest boss, it's accompanied by two Pop Poppies during battle, while in higher leveled quests, it can be encountered as a normal enemy. It can also be summoned by a "Traveler's Friend" Cobra in high leveled quests.

It also appears as a "mini-boss" in Uncharted Galados, in the last stage until the true boss of the area.

As its name suggests, it's a red-colored Orochi instead of blue. Its underside is white. The orb it's holding is blue and has a Mii nose and a Mii mouth attached to it. Like the non-boss Orochi, this monster has a pair of Mii eyes attached to its head. It also has Mii eyebrows attached to it, which the regular Orochis lack. It squints when casting.

Travelers' Hub quests that feature this monster seem to be complete random, so do the dungeon location and the quest rewards. It is also one of the bosses in the Youngest Fab Fairy's quest line, being in the Level 38 Castle Annex quest, where it uses the stats of its non-boss variant.

This foe reappears in the penultimate stage of Uncharted Galados after a gauntlet of powerful normal enemies. It may be harder here due to party wear-and-tear, but can be cheesed with Dancing Arrow if refaced with an Elf.

Tip: If encountered as a non-boss, it is susceptible to one-hit kill skills such as the Cleric's Righteous Anger, Chef's Monster Dinner and Imp's Demonic Whispers as well as status ailment-inducing skills such as the Elf's Dancing Arrow.

Red Orochi as viewed in the journal.

The party's leader and the Youngest Fab Fairy encountering the Red Orochi in her Level 38 quest.

A Red Orochi as a boss with its cohorts, two Pop Poppies. 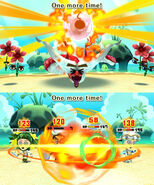 A Red Orochi summoned by a "Traveler's Friend" Cobra.