031
Red Goblins (Japanese: レッドゴブリン Red Goblin) are monsters that appear in the Underground Maze in East Neksdor Desert. Defeating this monster rescues a Mii's pair of eyes and eyebrows.

Sometimes accompanied by Yellow Cobras or Fossils when encountered.

As its name suggests, it's basically a red-colored Goblin. In addition to the Mii eyes also possessed by other Goblins, Mii eyebrows are also attached to this monster.

A Red Goblin in the Journal.

Encountering the Red Goblin along with two Goblins. 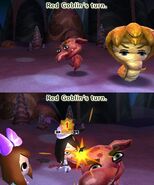 A Red Goblin attacking a Mii.