Magic All
Magic Terror
One More Time! (boss only)

199
A Red Dragon (Japanese: レッドドラゴン Red Dragon) is a quest boss found in the Sinister Plant in Nimbus. They also appear in Castle Annex in the Dark Lord's Castle and as a rare, non-boss enemy during various quests in Nimbus.

It is one of the three "bosses" that appear near the end of Uncharted Galados, "guarding" the Elven Charm that unlocks the Elf class. It is not a true boss as it can be re-fought and one-hit killed like any other normal enemy.

It is a large serpentine dragon. Its hide is dark red with a lighter underbelly and red-hot rings on it's two horns. It holds three Mii eyes on its face.

The boss version has more HP and Defense and less Attack, Magic, and Speed than its regular version. 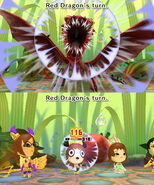 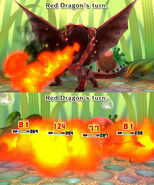