It is physically identical to the first frog, however its skin is pink with a gold mouth and green whiskers and tail fins.

Partway into The Sky Scraper, the party will encounter two "Fab Fairy"poles as well as this monster. Defeating them will restore the Fab Fairies' faces. 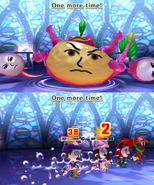