161
Rare Snurp (Japanese: 珍ピョン Rare Pyon) is a variant of the Snurp that can be found in the overworld map. They may disappear at any point during the battle. Rare Snurps have absurd defenses but only 5 HP; even high leveled Miis won't do any more than one damage unless high damage boosts (like something from assists) are applied.

Like most other Snurps, the Rare Snurp appears to be a small, armless, furry creature with a black head and snout. Under the Dark Lord's control, Rare Snurps also possess Mii eyes on their head. A Rare Snurp's fur is silvery white and is visibly shining and sparkling.

Tip: One way to bypass its absurd defense is to use Hyper Sprinkles to increase damage output. Even then, the result is never more than 3 damage per hit. Another way is by using the Vampire job's Curse ability to rebound half the damage to the Rare Snurp, which can kill it in one hit depending on the Vampire's defense and how much health the enemy has left. It also helps to use multi-hitting attacks such as the Thief job's Phantom Strike, as you will do at least 1 damage with every strike.

This Snurp can appear within Explorer Quests and Otherworld's Snurp Hunt, but these sources also produce Very Rare Snurps. However, if they are too hard or the party happens to see this one, take the opportunity.

A few strategies can be utilized to maximize the experience gained from a single Rare Snurp encounter:

Note that these strategies only boost the chance to beat Rare Snurps; they can still run away from the fight in most scenarios.

The Rare Snurp attacks a Mii. 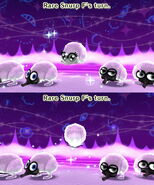 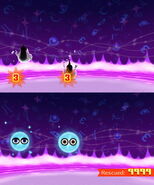 Rare Snurp distracted by a Pop Star with the Airheaded personality.