"An oddball who foists quizzes on unsuspecting adventurers."

The Quizmaster wears fuchsia top hat and pink suit. The top hat has a blue question mark with a white outline on its front and is decorated with stars. He wears a blueish green bow tie. 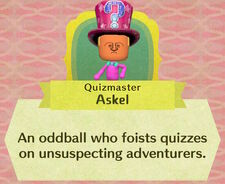 Like the Roaming Gourmet, the Quizmaster appears on a certain part of a map and disappears after being visited. Visiting him will have him introduce himself and offer the player to take on his quiz. If the player agrees to play, the quiz session will begin. If not, the Quizmaster will be disappointed and the player will be taken back to the map.

During the quiz, depending on the quiz type, the player will face against either one or three questions. However, regardless of quiz type, the player has to answer all questions correctly to obtain the best possible prize. Answering wrong or letting the 10-second timer run out will immediately end the session. The only exception to this rule is the Travelers' Hub quest given by this NPC, as failing a quiz will simply stop the player from progressing through the quest until you win. Prizes from winning can be either 5 HP Bananas/MP Candies or 3 Game Tickets.

The following are the quiz types offered by the Quizmaster.

In the Nintendo Switch version, which has the Makeup & Wigs feature, these modifications are not shown at all on the Mii characters featured on this type of quiz.

There are three questions, all involve picking a correct NPC Mii from a pool of four. While mostly simple as long as the player remembers which NPC is which, higher difficulties can put twists such as having all four different Mii characters in the same role as one correct NPC Mii. Sometimes it can be the Quizmaster himself.

There are three questions, all involve general knowledge. Due to its premise, questions can vary from asking what the current question's number is to real-life facts to even in-game mechanics.

A treasure chest variation of the shell game. The Quizmaster will hide a treasure in one of the three or four treasure chests and shuffle their positions. After that, the player will get to pick one of the chests. If the player picks the correct one, they will claim whatever is inside it.

There are three questions in this quiz type. The quiz involves most of the screen (top screen in the Nintendo 3DS version) being covered by curtains, leaving only a small gap where a random in-game Mii will show up briefly, and four possible answers either on the bottom screen (Nintendo 3DS version) or in the middle of the curtained screen (Nintendo Switch version). The Mii can be either one of the party members or an NPC. In higher difficulties, the gap between the curtains becomes smaller, requiring more focus.

Unlike other question types, there is no countdown timer.

Travelers' Hub quests only. As its name suggests, the player will face against three consecutive questions of a random type and difficulty. 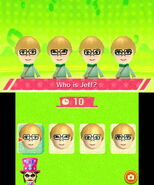 Example of a Who Is It? question. 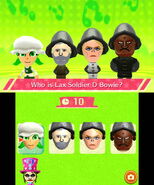 Example of a Who Am I? question. 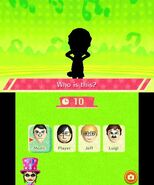 Example of a Silhouette Shenanigans question.

Example of a Curtain Conundrum question.

Example of a Mii Parade question. 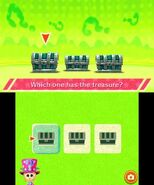 Example of a correct answer.

Example of a wrong answer.

The Quizmaster reaction to the player refusing to take his quiz. 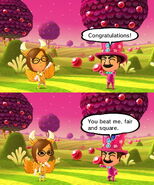 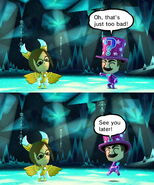 The Quizmaster in a random dungeon for the Quiz quest.

The Quizmaster on the Switch version.

A Who Am I? challenge.

A Who Is It? challenge. Note the intentional removal of both makeup and wigs on the Mii characters.