Puppet
Magic All
One More Time!

227
Puppet "Traveler" (Japanese: パペット"Mii's name" Puppet "Mii's name") is a traveler quest-exclusive boss enemy that can be encountered in one-time dungeons that are only available when a quest related to this monster is active. It is typically fought alongside two Heavy Hammers.

It has a brown cape-like bottom, and its top is grey, with a lighter gray patch that the face is on.

The skeleton under it is also different, being black with the "pupils" being white, and one being bigger than the other.

A Puppet "Traveler" In the Journal.

Fighting a Puppet "Traveler" with its Heavy Hammer companions in Castle Annex.

Another instance of a Puppet "Traveler" successfully puppeteering a Mii.

Another instance of a Puppet "Traveler" successfully puppeteering a Mii. 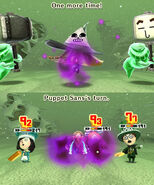 A Puppet "Traveler" with its guard lowered.