The Poppy (Japanese: フラワ Flower) is a post-game enemy found in Peculia, Nimbus and Galados Isle's Midland Marsh during various quests. It tends to appear with many others of its own kind and also stronger enemies and bosses.

It is a single yellow, five-petaled flower with a black spike on the end of it. A pair of Mii eyebrows and eyes are attached to this spike.

Encountering a Poppy along with two Calamitous Armor. 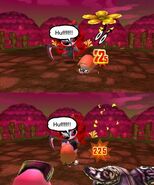 A Poppy when it's defeated.

A Poppy defeated by Monster Dinner.