209
The Pop Poppy (Japanese: フワフラワー Fwerflower) is a post-game enemy found in New Lumos, Peculia, Nimbus and Galados Isle's Midland Marsh during various quests. It tends to appear with many others of its own kind and also stronger enemies and bosses.

It consists of two red, five-petaled flowers with a dark green spike hanging from them. A pair of Mii eyebrows and eyes are attached to the spikes. 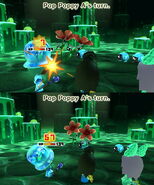 A Pop Poppy attacking a Mii.