114
The Pop-Up Puppet (Japanese: どっきりパペット Dokkiri Puppet; Shocking Puppet) is a boss monster found in Manor Macabre. It is encountered as the "invading spirit" that the quest giver wants evicted. It indirectly guards the Bat Charm, as it's the reward from defeating it. It can only be fought once.

It levitates, but will drop down if the player waits without attacking.

It resembles a pink-and-blue witch hat with a red robe drooping from under it. Under the robe is a beige skeleton marionette. Two Mii eyes are attached to the hat.

The party accepts the quest from a vampire in Travelers' Hub who explains that there's a ghost living in his/her mansion and he/she wants them to get rid of it. After they accept it, the party travels to Peculia in order to complete it.

They then enter Manor Macabre, where the puppet is hiding. When the team reaches the end of the mansion, the puppet will engage the party. After they defeat it, the vampire will reward you with the Bat Charm, the item to unlock the Vampire job. 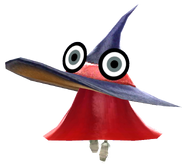 The Pop-Up Puppet in battle.

The Pop-Up Puppet attacking a Mii. 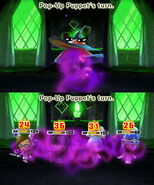