050
The Pharaoh "Genie" (Japanese: ファラオ"Mii's name" Pharaoh "Mii's name") is a boss encountered during the events of Miitopia, as the end-boss of Neksdor. As the name implies, the Pharaoh is inspired from the monarchs of the same name from Ancient Egypt, particularly Tutankhamun, going along with Neksdor's Arabian-Egyptian theme.

The pharaoh, said to be one of the Dark Lord's best minions, uses the stolen face of the Genie of the Lamp, residing within the very end of the Great Pyramid.

Pharaoh "Genie" is a giant gold disembodied head of a pharaoh with a black beard. It dons a pharaoh headdress that has green stripes on it and wears a pair of red earrings. This is the monster where the Genie's face ended up attached to for the first time.

As the Hero travels further into the Great Pyramid, they manage to encounter the Dark Lord again, who is in possession of the Genie's face. As he summons the ancient pharaoh of the pyramid, he attaches the face to the pharaoh, initiating the battle.

In battle, the Pharaoh is a tough opponent, possessing the ability to curse members of the player's party, causing them to stand with cross arms while wearing a nemes, a pharaoh headdress. Additionally, cursed Miis can offer up HP Bananas to the Pharaoh if they have any, healing the Pharaoh. Eventually, the Pharaoh is at last defeated, and the Genie's face is restored.

Tip: To get rid of the curse, simply place the Mii that is cursed into the Safe Spot. The curse should go away on its own. If all other Mii characters have been defeated, or the cursed Mii is the only one in the party, the curse will go away regardless after 4 turns. It will only curse a Mii if no one is already cursed. (in other words, only one Mii will be cursed at a time.)

The Pharaoh "Genie" in the journal.

The Pharaoh in battle. 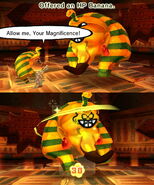 A cursed Mii giving the Pharaoh an HP Banana, healing it.

A Mii caught by the pharaoh's curse in the Switch version.