093
The Pengy (ギンちゃん Guin-chan; Penguin Man) is a monster found in the Ghontu Waste of Powdered Peaks. It usually appears in groups or with other monsters.

Defeating it will relinquish a pair of Mii eyes.

It resembles a rounded penguin with a flat head, teal hide and white underbelly with grey webbed feet that are barely visible. Pengies have a spear-like yellow beak which happens to be its only weapon in battle. Its Mii face is two eyes on its head. If you let it idle long enough, it will tauntingly shake its behind at the player, similarly to the Twerkey, but in a more adorable manner. 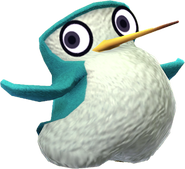 Official render of the Pengy.

A Pengy in the Journal. 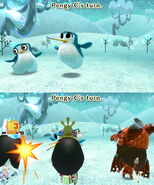 A Pengy attacks a Mii.

A Pengy defeated by Monster Dinner.

A Pengy defeated by Righteous Anger.