077
The Paincloud (Japanese: モクモク“Mii’s name” Mokumoku”Mii’s name"; Cloudy “Mii’s name”) is a Cloud-based boss found in Karkaton Ascent. It is most likely to use the face of the ninth teammate.

It, along with the Burning Golem and Magma Slime, are the three bosses holding the protagonist's friends' faces from the Haven Hollow, the cloud is always the second boss the player faces when rescuing the teammates' faces, therefore wearing the teammate's face the player rescues second.

This can also be seen as a random quest boss.

It is a cloud foe, so it retains the fluffy body and hands. It is colored purple and its lightning is black with purple edges.

In the switch version, we can see the cloud has a much darker hue, being closer to dark purple.

After discovering three faceless party members in Haven Hollow, the Great Sage accompanies the hero to find their faces. One of the teammates' faces is attached to this monster, which resides somewhere in Karkaton Ascent.

After successfully defeating it, the rescued face floats back to Haven Hollow, where it reattaches back to its proper owner. This allows the rescued teammate to rejoin the protagonist's party.

The post-game Travelers' Hub quest variant can randomly show up in the end of a temporary dungeon, this time with the client's face. Defeating it will clear the quest.

Unlike the Burning "Party Member" Golem and the Magma "Party Member" Slime, Paincloud "Teammate" is the only teammate-based Karkaton Ascent boss to have a possibility of being encountered in post-game Travelers' Hub quests. Naturally, the post-game version is significantly tougher.

A Paincloud "Party Member" in the journal. 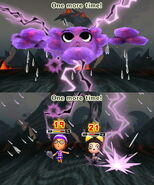