Outings (デート Date) are a feature introduced in Miitopia for the Nintendo Switch. By using an Outing Ticket, the player can send two Mii characters (or the Horse and a Mii) on an outing, and there will be a cutscene of them bonding in the area according to the ticket name. This will bring relationship up between the involved characters. If the ticket is used on Mii characters that have a quarrel, this will instead help fix up their relationship.

Outing Tickets can be obtained from the main storyline or by getting lucky with the Roulette. Daily letters may also gift the player with Outing Tickets.

The player may also have a chance to encounter a monster or get souvenirs from the outing (HP Bananas, MP Candies, or Grub). Very rarely this may include encountering a rare type of Snurp, even including the strong variations, such as the Very Rare Snurp.

Each time two Mii characters go on an outing, the events that take place will always be different, giving unexpected, sometimes funny, scenarios.

Unlocked after reaching Realm of the Fey

Certain outing scenarios have a chance to drop certain grub (otherwise the reward will be simply snacks). There are four types of grub per outing scenario, three of which have drop rates mentioned in the game code, while the fourth one does not have it but does not necessarily mean a guaranteed drop. The following table details the possible grub from every scenario.

Note that grub obtained from defeating monsters (if encountered; drop rates still apply) before arriving at the outing destination will be given to the player as souvenir instead of obtained right after victory like normal battles.

Note: Event names in italic are from Horsing Around tickets.

Obtaining an Outing Ticket from the Worried Mother's letter. 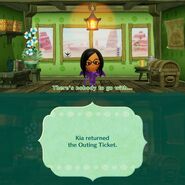 When there is no one to take on an Outing.

Preparing for an outing.

An outing at the café involving a Mage and a Warrior.

A Chef forgot their wallet while on an outing to the café with a Mage.

A Cat and a Mage sitting in the café.

A café outing where a party member lists off what drinks they just got. Original by Plas#0365.

A seaside outing involving the horse and a Mage.

A Cleric and a Pop Star during a seaside outing.

A Mage and a Warrior traveling for an outing.

An outing taking place at the cinema.

A Chef and a Cleric at the cinema outing.

A Mage and a Chef at the cinema.

A Warrior sleeping through the movie on an outing with a Mage.

A Warrior and a Mage holding each other in fear and screaming in the cinema.

An outing taking place at the fishing spot.

A fishing spot outing involving the horse and a Mage.

A Cleric catching a fish during the outing at the fishing spot.

A Warrior enraged by people littering at the fishing spot with a Mage.

A Thief fishing up an HP Banana on an outing with a Chef.

An outing involving a Pop Star and a Mage singing together.

An outing involving a Cleric while a Cat sleeps.

An outing taking place in a botanical garden.

An outing involving a Scientist and a Princess taking a cooking class.

The Horse about to steal two apples from an Imp and a Princess during a ranch outing.

A UFO abducts sheep during a ranch outing, as a Cat and a Thief snooze.
Community content is available under CC-BY-SA unless otherwise noted.
Advertisement