130
The Orochi (Japanese: オロチ Orochi) is a serpent enemy found in The Sky Scraper, most commonly alone, but may show up in a pair or even a trio (in the final stage). Sometimes, they can pair up with Crystals and Purple Crystals.

Defeating one relinquishes a pair of Mii eyes and a mouth.

It is a long floating snake with blue scales and a light blue underbelly. It has two large tufts of hair above its Mii eyes. Its "beak" is darker and it has two clawed arms grasping an orb. The orb is beige with an orange center and a Mii mouth on it.

The Orochi attacking a Mii. 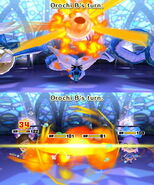 An Orochi defeated by Monster Dinner.

An Orochi defeated by Righteous Anger.