022
Naughty Imp (Japanese: やさぐれデビル Yasagure-Devil; Sulking Devil) is a monster that first appears as a boss inside Greenhorne Castle. It reappears in the Dark Lord's Castle among other foes. Defeating this monster rescues a Mii's pair of eyes.

It appears alone in its mini-boss fight.

It is a green-skinned Imp. It has green hair and robe as well as a lime green spear as its held weapon. A pair of Mii eyes are attached to its face.

After obtaining the Calming Fruit in Wayward Woods, the player's party returns to Greenhorne Castle only to discover that it has been wrecked by monsters. After defeating two Imps, this monster is fought in the Throne Room, where it's seen threatening the King.

Defeating this monster there will make the castle monster-free and allow the plot to move forward.

Naughty Imps can be encountered later in Dark Lord's Castle as regular enemies.

A Naughty Imp in the journal. 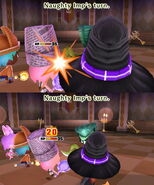 The Naughty Imp attacking a Mii.

The Naughty Imp's failed attempt at dipping a Mii's heart in darkness.