115
Mice (Japanese: ネズミー Mouse) are monsters that can be encountered through a quest in, Greenhorne, specifically during Dubious Mayor's quest, which is first given when the main story is still ongoing.

The Mouse is a small, red, bipedal mouse with two-toned ears. Its ears, feet, and tail take on a more crimson color, while its body and stomach appear pink. The tail is like a rat's except with a small, furry, pom-pom-like ball at the end.

Its Mii parts are two eyes.

A Mouse attacking a Mii. 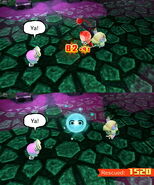 A Mouse who was defeated.