013
Moles (Japanese: モグラー Mogura) are monsters that appear primarily at Castle View and in the Arid Frontier.

Sometimes accompanied by Nose Rocks, Smileshrooms or Banshees when encountered.

Appearance-wise, Moles almost look like the real animal they're based on. All Moles have two stray hairs on top of their head. Their nose is pointy. They possess sharp claws to help them burrow underground. Their fur is brown with lighter brown on their undersides, which cover from the mouth area to their belly. Their lower torso and feet are often hidden underneath the hole they pop out from, only visible when they're knocked out. Under the control of the Dark Lord, Moles have Mii eyes attached to them. During battle, they laugh at the party.

A Mole in the Journal.

Encountering a Mole along with a Banshee. 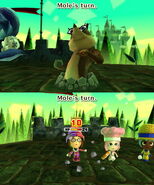 A Mole throws a rock at a Mii.

A Mole defeated by Monster Dinner.

A Mole defeated by Righteous Anger.