202
Moldy Mummies (Japanese: ドロドロマミィ Mushy Mummy) are mummies found in New Lumos's 4th District and in temporary dungeons. The coloring of Mummy Jerky ★★ is based off of Moldy Mummies.

They usually appear solo or in pairs, often with other foes.

There is even a band of four located somewhere, which can potentially strip away the entire party's weapons.

It has a Mii's eyes, eyebrows and nose. It is deep green and covered in patches of dark green mold and otherwise physically identical to the Mummy.

Note: If a Moldy Mummy manages to steal a Tank's weapon, then the Tank will be unable to attack. However, the Tank can use assists such as Pincer and Lend a Hand, but it will always result in a miss. 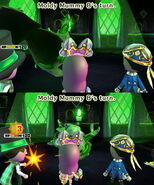 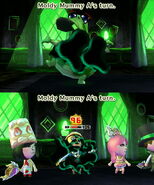 A Moldy Mummy vomiting out goo.

A Moldy Mummy spitting out its catch. 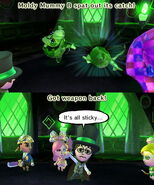 A Moldy Mummy defeated and spitting out its catch.

Encountering a Moldy Mummy with a Red Dragon.

Encountering two of them with a Clever Running Nose.