036
The Minotaur (Japanese: ミノタウロス Minotauros) is a miniboss which appears in the Underground Maze in the main game.

The Minotaur is a large creature which resembles a bull. It wields a great hammer made of rusted steel, and it wears iron armor, with two large pauldrons and metal spikes on its back. The Minotaur is brown in color with beige horns. Attached to this enemy's face is a single Mii eye.

During the party's journey to the Underground Maze in search of the Genie, they suddenly hear mooing sounds as they go deeper into the maze. In an even deeper part of the maze, right before the door that blocks their way to the Genie, a loud roar is heard instead. This monster is then encountered.

After defeating it, the party can finally continue their journey.

A Minotaur in the journal. 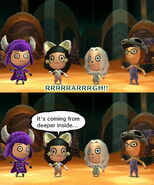 The Protagonist and Teammates hearing the 'roars' of the Minotaur.

The Minotaur in battle.

The Minotaur attacking a Mii. 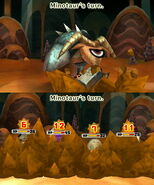 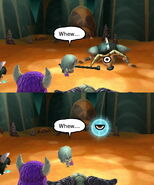 The Minotaur with its guard down.