A Mii is a customizable avatar created by Nintendo. They can be used on the Nintendo Wii and any main Nintendo console released afterwards, as well as some apps released by the company.

The player's first Mii is the only Mii they can control during battles since he/she will be the main protagonist. The other members of the party act on their own in battles, though they can be controlled in the overworld if the Hero is not present.

The player also has the option to create new or edit Mii characters in places such as Neksdor, Realm of the Fey, the Travelers' Hub, and anywhere else applicable in the Mii Cast menu.

Certain Mii characters, such as the Fab Fairies, the Great Sage, the Ex-Dark Lord, and anyone from the Traveler's Hub may come and stay in the party temporarily. They will use attacks similar to the attacks of their supposed job class (i.e. the Youngest Fab Fairy will use the Dancing Arrow attack, which is actually an attack used by the Elf). They will not take up room at the Inn, though they will appear in the corner of the screen that signifies they are staying at the Inn (Nintendo 3DS) or in a separate room to the right of the Inn (Nintendo Switch).

A party of Mii characters fighting and losing because of two lost faces and two knocked out members. 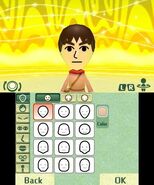 Screen that shows if the player chose to create a Mii in the Nintendo 3DS version.

A Mii getting their face back after it was stolen.

The NoName Mii in a cutscene
Community content is available under CC-BY-SA unless otherwise noted.
Advertisement