Miitopia Wiki
Register
Don't have an account?
Sign In
Advertisement
in: Monsters, Nimbus, Scorpions, Monsters that can instantly knock-out Miis

Metal Scorpions (Japanese: メタルなサソリ Metal Scorpion) are enemies found in the Sterile Plant of Nimbus. They tend to appear with their own kind and other enemies, such as Aging Robots.

Defeating one relinquishes a pair of Mii eyes and a mouth.

Metal Scorpions are normal scorpions that have been plated in silver metal. They now have sinister Mii eyes and a mouth.

Encountering the Metal Scorpion along with two Robo-Pengys.

The Metal Scorpion attacking a Mii. 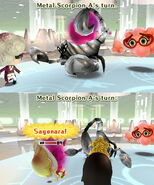 A Metal Scorpion that has been distracted.